The overlapping crises – energy crisis, housing crisis, climate crisis, as well as high inflation and rising interest rates – show us that the current model of urban development, based on large scale employers and infrastructure investment, has reached its limits. Instead, it is necessary to focus on locally rooted development and on building community strength, because only by working together can we build an economy that is resilient to the crises.


The Urban Resilience Package (Pakiet Miejskiej Odporności) responds to these very challenges, which is based on the model of a Development Cooperative, enabling the use and enhancement of the local resources – both material and social. The solution is founded on three pillars:

Democratization of the approach to development is necessary for the effective and long-term mobilization of all local resources. As well as building communities capable of responding efficiently to the upcoming changes, being able to adapt to the new living conditions, to regenerate quickly and to prevent the most severe effects of the crises.


Development Cooperatives are cooperatives that aim to fulfill the strategic tasks of a given municipality. Thus, they conduct activities of a public nature, such as:


Their goal may also include equalizing social inequalities, including the integration of economically inactive women into the job market, and supporting vulnerable communities.


The model designed by CoopTech Hub envisions that, as a first step, Development Cooperatives will be established by local government institutions (such as a municipality, a municipal corporation or a co-op) to ensure stability, institutional commitment and resources. However, from the beginning, the community’s voice must have a say in how the cooperative will operate and what it will do – the cooperative’s area of work should either be determined through a consultation process or be based on the strategic documents that were created with the participation of the local community. In the second step, the Development Cooperative will become open to the community’s investment, allowing local organizations, entrepreneurs and individual residents to engage their own resources and become co-owners of the cooperative, which is the local vehicle for development. The cooperative will also be an opportunity for the middle class to use their savings to enhance the quality of their daily life. We developed our model based on workshops in two cities – Dąbrowa Górnicza and Konin. While both of these cities are in coal areas and currently undergoing a sustainable transition, we found our proposed model to be universal. 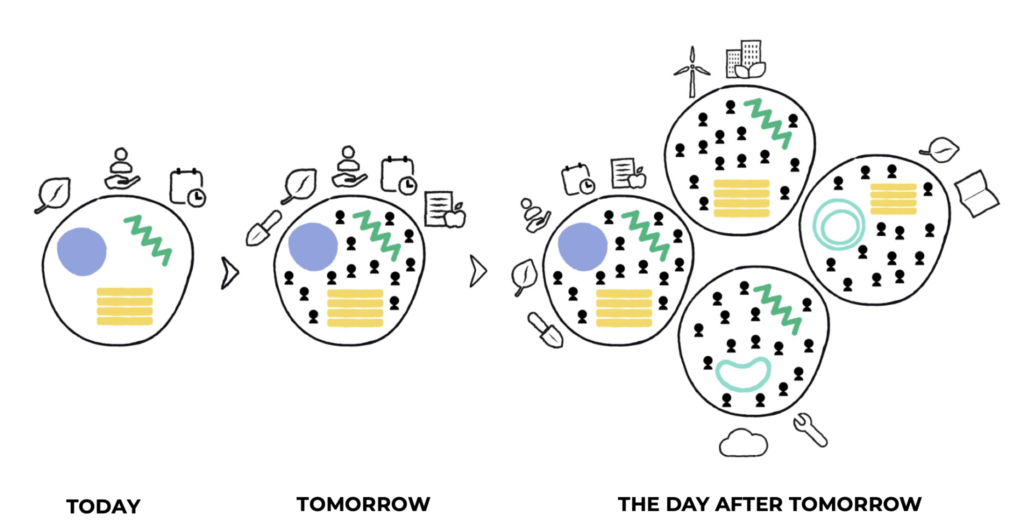 The vision to establish a development cooperative in Dąbrowa Górnicza is part of a broader project to revitalize the space of its downtown. The leader of this process is the city’s Fabryka Pełna Życia development company, which manages the newly created city center. Fabryka Pełna Zycia was built on the site of the former Defum metalworking machine tool factory, and now serves as a local center, integrating catering areas, an open recreational space and a multipurpose pavilion in a renovated post-industrial building.


The site is also to become a center for the promotion of locally and socially rooted entrepreneurship. Created during the workshop, the cooperative model assumes that the Dąbrowa development cooperative will be dealing primarily with the administration of the Fabryka’s site and the greenery care in other parts of the city, including urban agriculture. The management part includes taking care of the Factory’s gastronomic services (including the establishment of an urban brewery), as well as the organization of cultural and recreational events in this inviting area and all related activities (e.g. promotion). This space can also feature a craft and repair workshop „maker space,” an incubator and hub for Dąbrowa entrepreneurs, a food co-op or a beekeeping farm. The cooperative will also be involved in cultural animation, where ideas have emerged for holding festivals or setting up a museum. Moreover, it is to carry out educational actions aimed at the local community on sustainability, entrepreneurship and promoting civic engagement.


Although the heart of the cooperative will be Fabryka Pełna Życia, its activities will extend beyond its site to reach a wider range of city residents – who will be able to benefit from health services (including, for example, the provision of wholesome meals for the elderly) as well as care services, or design and housekeeping work, gardening, transportation and cargo services. The next phase, opening up for co-investment by the city’s residents, could be based on one of the ideas, which is the creation of an urban farm, operating on both city land and private property. Residents could develop the cooperative by investing their savings, contributing their labor, or sharing their home gardens or other land they own. Private companies and other institutions could also get involved in this process. Everyone could also invest their assets in the previous fields of the cooperative’s work. The urban farming could be handled by an already existing Development Cooperative or by a new cooperative set up just to handle this area.

The Konin model is slightly different, as the leading role has been taken by Konin youth – those both involved in activist initiatives (such as the Fridays For Future or urban activism) and those active within the local university – the Konin Academy of Applied Sciences. Konin’s youth are the social group that most strongly feels the need to establish a new model for the city’s development that will allow them to either stay in the city after graduation, or to return there after having studied in another city.


During the workshop process, we came up with a vision for a Development Cooperative that could simultaneously operate under the formula of a students’ cooperative. This would result in the co-op hiring young people on terms that are comfortable for them and would also provide them with casual work in areas that are close to the fields they are studying at the Academy. In this way, students will be able to complete mandatory internships in their final year of studies. Eventually, it will be able to use a digital platform to improve and optimize handling orders from the local community.


The idea is that the democratically decided financial surplus will be allocated significantly to the cultural projects, invigorating the local community and holding entertainment for the local youth. Hosting parties, concerts and other events will not only increase the attractiveness of the city of Konin for younger generations, but will also become a space for activating youth and another of the cooperative’s income source. The know-how and experience of the Konin Chamber of Commerce (Konińska Izba Gospodarcza) can become a support for this cooperative.


The next step would be to become a Development Cooperative – once it starts working with the city government and opening up to the local community. After the cooperative formed by young people has built its credibility as a local employer, the city may decide to redirect orders for specific services to it and provide it with city resources. Konin’s residents and residents will be able to contribute their shares to it as well as receive the benefits of their membership. In the cooperative’s democratic community, however, the young generation will still be the one with a strong representation of their voice, and coop’s activities, as other entities and individuals join, will begin to more effectively reconcile the interests of youth with those of other social groups.

📎 Download the summary of the Urban Resilience Package report (pdf).

Publisher: CoopTech Hub in cooperation with the Heinrich Böll Foundation in Warsaw

The report Pakiet Miejskiej Odporności. Sprawiedliwa spółdzielcza transformacja dla zrównoważonego rozwoju regionów powęglowych was prepared in cooperation with the Heinrich Böll Foundation in Warsaw as part of the project „Just cooperative transition. Incubation of energy and development cooperatives for the green development of post-coal areas.”